These Trolls are Killing Me but at Least They are Publishing Stuff!

I know, I know: I haven’t written an original post since August. Just reblogging my brains out… and working on the antrollogy, which I’m illustrating myself because I suffer from delusions that it will all work out someday. So I redrew the cover, because it needed to match the interior illustrations. As usual, it’s not finished, but whaddya think?

Then you might as well see one of the interior shots:

Of course, I realized that the illustrations were all the WRONG SIZE for the paperback, so I’m redrawing them, cuz THAT doesn’t take much time.

Meanwhile, lots of the “trolls” have published new books since we started this project together, and over the next few weeks I will try to devote some blog time to each of them.

So now you know why I reblog. In case you missed it, here’s my last original post, from August. At least I’m reblogging myself today. (Probably not something to brag about. I’ll go blind!) This post was instigated by Christina L. Rozelle, who has an intriguing new book coming out soon — The Treemakers. I will keep you informed! Meanwhile, if you’d like to read her chapter 1, you can check it out here:
http://christinalrozelle.com/2014/10/30/the-treemakers-chapter-1/

BECAUSE SOMEONE HAS TO SORT OUT EEYORE:

I’ve been asked by Christina L. Rozelle, author of The Truth About Mud (the second-longest story in my troll anthology), to post “Why I Write.” If you have blog-hopped here from there, thank you for coming. If you have hopped here from elsewhere, please hop on over to the link above. (Not now! Sheesh!)

Of course, there are lots of answers to Christina’s question — a different one for every day. A month ago I might have answered glibly, “Because it’s fun to wantonly use adverbs,” and run away — figuratively, of course, since my ass was firmly planted in this chair and it was hot, so my elbows were hopelessly stuck to the desk. (They still are.)

Here’s me, showing my panties to a cabbage

I started writing (actually printing) as a four-year-old, when I made up stories about the family that lived in my closet — the closet I shared with my little sister. In that family, everyone had their own room, even the Mommy and Daddy (why should they have to share, after all?) and a sock doll named Eegie and Tuffy the cat. (Who, it must be noted, had the biggest room.)

Today, I could say I write to bask in the glow of reviews (which, frankly, are few and far between, possibly due to my habit of aggressive non-promotion). Yesterday’s new Hyperlink from Hell reviews, my first on Amazon UK, included such head-swellers as:

“The cleverest piece of fiction I’ve ever read.”

“Somewhere in the multiverse there is a version of me who hasn’t read this book. I feel sorry for her.”

A couple of days ago, if asked why I write, I might have said “Because writing and reading are comforting” and referenced my novel-in-progress, Riding the Bull, the sequel to the above-lauded (and larded) book. In RTB, a character relates this quote, from A. A. Milne’s Piglet, in The House at Pooh Corner:

“Supposing a tree fell down, Pooh, while we were underneath it?”

Here’s that same character explaining why she became a psychiatrist:

It’s partly thanks to Pooh and Piglet—and lonely, depressed “Eeyore” the donkey—that I became a psychiatrist. I made a list of promises to my mother before she died; the first was to “Take care of Daddy.” The last was, “And if nobody fixes Eeyore, Mommy, I’ll sort him out.”

I was six. I still have that list, and everything’s checked off but Eeyore.

So I write because it’s comforting, and to make things right.

I also write because I’m kinda smart (the Internet says my IQ is 134, so it must be true!), and because I’m kinda dumb (too befuddled to be a waiter, for example; I really admire people who can do that), and because it’s fascinating — to me, at least — to see those two sides of me duke it out on the page. (This is not a pretty spectator sport; it’s hard to see exactly what’s going on — kind of like two bulldogs fighting in a bag.)*

My brain works, when it works, in mysterious ways. I am a curious sort. Just yesterday I was wondering if anyone else’s panties suddenly, irrevocably roll down when they stretch, yawn, or sneeze — and the median age when people give up the valiant fight and start wiping from the front. So I write to explore the gap between the odd way my mind works and the way individual readers’ minds work. I want to know if anyone “gets” me, I guess. (And if they do, I worry about them. I really do.) 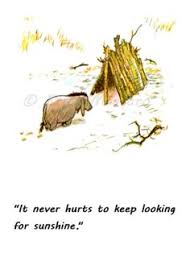 But mostly I write for the money. I sold one book this month, so far. In Germany. I made .30 Euro. (Methinks I’ll buy a pony…!)

Or maybe a donkey.

I guess I must write… because it’s fun. Nothing else comes close. (Except, of course, painting pictures on a closet wall.)

*Please do not worry about the bulldogs. They aren’t real.

Other illustrations are Ernest Shepard’s drawings for A. A. Milne’s Winnie the Pooh series.