The short version of me:

I sit at my desk overlooking the Aegean Sea, writing and drawing and formatting like Penelope weaving her cloth—only not really. Unwelcome suitors aren’t exactly lined up around the block, so I’m kept company by a chipped ceramic figurine of Avni, a beloved comic book character here in Turkey. My husband, the Great Fisherman Boo, may be out battling sea monsters like Odysseus, but unlike Penelope’s hubby, he’s generally home for supper.

Lindy (not her real name) Moone grew up in a tiny village in New York State’s St. Lawrence County, where dogs and children ran free. She’s lived in Florida, Washington State and California, and now lives in a (not-so-tiny) village in Turkey, where dogs, children and chickens run free.  Here’s a pretty picture of her. (Very old. Very flattering. Lots of makeup she wasn’t used to.)

A new photo is being held hostage until more folks buy Hyperlink. Botox doesn’t come cheap, you know, and neither does tequila.

While we’re waiting, here’s a pretty picture she drew.

Still here? In that case…

Don’t you hate when authors write about themselves in 3rd person? Lindy does, too. But it makes it easier to bamboozle, hoodwink, deceive, obfuscate, and otherwise really milk that thesaurus for all its juicy, redundant goodness. So here’s “her” bio for you, in fact-checked form:​

The wildly enigmatic (mostly false) Lindy Moone comes from a short line of mental health professionals (true), and now lives far, far away from them: someplace warm and sometimes rainy, near the sea, where she can play with her pencils as much as she likes (true).​

She trained as an artist (true) but always wanted to write (painfully true) stories — and always did, mostly in secret (mostly true). She is stunningly beautiful (sadly, false), twenty-two years old (Pants on Fire!), and is married to “The Great Fisherman Boo” (true).

Lindy loves dogs, cats, and thunderstorms, but not at the same time. Some of her favorite books are “Catch-22,” The “Gormenghast” series by Mervyn Peake, “Alice in Wonderland” and “The Hitchhikers’ Guide to the Galaxy” (true). So that explains her writing (mostly true) nonsense.​​

Oh, and she has such a crush on Neil Gaiman. 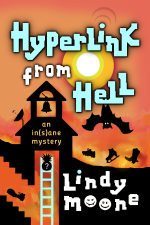